Tranzfuser is a graduate game pitching competition for a grant of £25k supported by the UK government. You pitch a prototype and teams that get selected will be awarded £5k to develop and work up their prototypes over the summer period. At the end of the summer, Tranzfuser hook you up with a free both space at the biggest trade show here in the UK called EGX. Teams demo their prototypes and go on to pitch their games for an additional 20k.

If you’re thinking of entering, you can read lots of wisdom from our friend Caoimhe here.

We competed in Tranzfuser in 2016. Back then we were younger and fresh faced. We can say with certainty that competing in the Tranzfuser programme has been the best thing for our careers to date. It not only raised the profile of our company it has made us very employable as individuals. The programme has changed a lot over the years since we competed but in the best possible way!

What was our project?

We made a game called Ruya for Tranzfuser. Ruya is a meditative puzzle game about dreams and motherhood. You can pick it up on Steam if you’re curious. Ruya launched in 2017, about a year and a half later to when we were competing in Tranzfuser.

Where did it come from and how has it evolved over the past number of years?

Tom built the core mechanics as a university project. I later got involved and started helping him with the design and the visual style. The art that I brought in come from another game I made for a game jam called Indie Speed Run. We kind of merged that art style and Toms mechanics and then it grew from there. We set out to re-imagine match style games, to try and make them ‘cool’ I guess, they get a bad rap from a lot of people in the indie scene I find. Our thinking with Ruya was to marry the mechanics of a game like Bejewelled with the emotional depth of a game like Monument Valley.

How did we find out about Tranzfuser?

Tom heard out about Tranzfuser through the news and mentioned that we should apply. We were trying to pursue our own thing and make own video games full time for a living, but didn’t necessarily know the whole logistics of doing that. I think we were both good at making games but had little to no idea about setting up a business, so it seemed like a no brainer. We applied, got through and started working out of the Eastern Enterprise hub – a lot of the work for Ruya was done there, especially working out our pitch and deconstructing its design. Back then it felt like doing a fourth year of University and getting paid for it which was really cool!

As a team we simply wanted to form a game company to create the kind of games we think have value. There was also an element of wanted to compete in a more serious and professional capacity. To see what we could do and where we sit relative to the rest of the industry. We had entered a lot of game jams in the past but Tranzfuser was a big step up with tangible rewards and greater stakes at play.

How did you apply your university learning to Tranzfuser and beyond?

My dissertation was in game jams which taught me to work quick and iterate and fail a lot. We were taught at university that are first 10 games would like suck and that you should just get them out of the way. Most of how Miracle Tea approach making games specifically the emotional and mechanical side comes from our teachings from University. Our lecturers really encouraged that. There was also a part of me that wanted to prove to lecturers that what they taught us at University had value and that we really listened to them and that their teachings had a real impact on their students. I think Tom really learnt how to get good at coding and craft mechanics. And I got really into the more emotional side of game design. And I think when we come together it makes for an interesting team dynamic. There’s a kind of push and pull that happens when me and Tom work. We pitched a lot of games at University. Every couple of weeks we would have to pitch our game to a panel of lecturers – so when it come to Tranzfuser it felt very familiar.

What did Tranzfuser do for you?

Tranzfuser opened a handful of opportunities in the industry that otherwise would have taken us years to understand and achieve. How Miracle Tea pitch our games today is built upon how we pitched to Tranzfuser back in 2016. Only with more confidence! Tranzfuser gave me personally a shortcut to a certain level of confidence and growth that I never knew I had. As a result of that growth, we’ve been asked to mentor students at our local university, be a judge for game jams in our community and asked to speak at conferences overseas.

The psychological impact of getting into Tranzfuser was a big deal for us. We saw a lot of our peers getting big studio jobs or succeed in various game jams and competitions. It gave us a certain level of confidence and esteem that I think we all needed. Observing people play. People taking photos with plushie. We knew that even if we didn’t get the funding for Tranzfuser that we’d be able to get work in the industry, people were coming up to us saying if this doesn’t work out email us and we’ll hook you up with a job. All of that was really re-assuring and motivating.

Watching people being confused by your game is always difficult, it still happens too. We were bug fixing stuff throughout the EGX competition, Tom would setup his laptop around the corner from the booth and would be iterating big usability issues on the fly. A lot of sleepless nights and anxious days! Game development is really hard, such long hours and staring at a computer can sometimes be really soul draining. I think back then the way we worked wasn’t necessarily the healthiest. We’re a lot more balanced these days.

If you could turn the clock back, would you do anything differently?

Pre-EGX I would’ve spent less time crafting the later stages of the game and more time focused on refining the first 10 minutes of gameplay. Because that would’ve resulted in a stronger slice for the EGX demo, and allowed us more time for testing to iron out usability and readability issues beforehand. With the pitch, I would’ve worked on projecting more to the entire room to assert a level of confidence. Also, avoiding apologetic language when discussing the game or ourselves might have been useful. With networking to be more assertive when seeking out the people that could help us achieve some of the things we needed at the time. I think when your starting out that is normal though and it gets easier with time.

What were the challenges of team working?

Sometimes the worry can be paralysing but at the same time the amount we worried probably sometimes helped because we’d be over prepared as a result. We all got really close after Tranzfuser, our team getting funding kind of built more mutual respect and re-assured everyone that we’re on the right path. When we started out communication was difficult, we’ve slowly figured out how to articulate things with more clarity. Talking about finances was something we shyed from in the early days but we quickly got over that once things started getting more serious with the business. A lot of that also seems to come from just slowly becoming comfortable with another person and being real and honest and clear about what your goals are.

The idea that we had people aware of what we were doing and had eyeballs on us is a real motivator. You know, being awarded funding and having people say congratulations is a motivator, there’s a moral responsibility associated to that to set out what you indented to do.

Being in sticky financial situations can give you a certain amount of drive to get something done and I think when we were starting out that was true for all of us at a point in time. I think we’ve all realised what we have going in our team is quite rare. Just the idea that we still get on post-release of game is apparently not always the case within the industry – people often end up hating each other from what I’ve observed.

Why should the up-and-coming game dev talent of tomorrow apply to Tranzfuser 2020?

We took part in Tranzfuser to make running a video game company a reality. It’s the best way to show the games industry that you’re serious about what you do. Tranzfuser was for sure the best thing we could have done for our careers coming out of education. If you don’t try it you’ll never know what you’re capable of.

Why is Tranzfuser important?

It allows the opportunity for great games to exist which is a really important thing, especially right now with what’s going on in the world. You know, games are a safe haven for a lot of people to escape or unwind from their life, and that’s important. Tranzfuser increases the chances of those games being put out into the world. I think we’re really lucky to have something like this in the UK. I’ve met developers from other parts of the world that don’t necessarily have that support and as a result the game scene is really sparse and it’s difficult to survive. It’s an initiative that works too. We’ve been able to stay in business and hire people for almost 4 years and Tranzfuser was the catalyst for all of that. 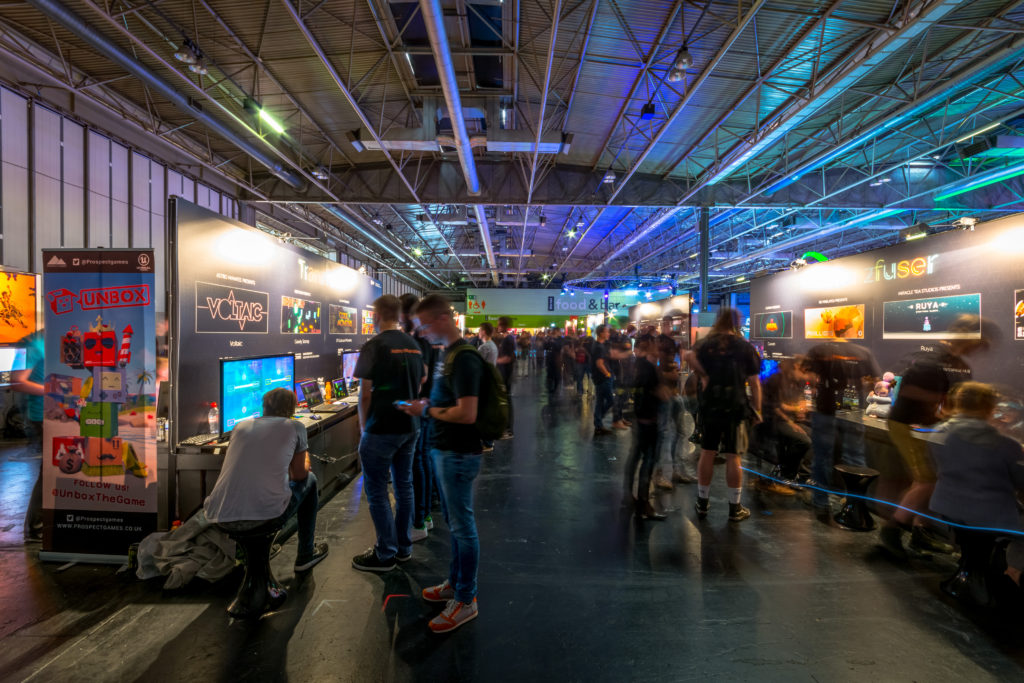 We got really motivated after Tranzfuser and then Ruya launched about a year and a half later. We pitched a hack and slash game called Oath to UK Games Fund shortly after Ruya released – that would’ve been in 2018, I think. Oath got rejected but we learnt a lot as a result. Then we started doing client work to sustain the company and working on prototypes on the side. We trickled out Ruya on other platforms slowly maintaining the game overtime and secured a licencing deal after shortly after Ruya launched on Armor Games. This was a big deal for us.

How have we sustained our business?

We’ve had good client work post-Tranzfuser. We worked with lady called Helen who we helped build a platform that teaches people about financial education. We made her a series of small games for her. The licencing deal was a real help. We have the mentality of playing the long game and trying to sustain ourselves over a long period of time. A lot of developers seem to bank on having a hit game and I think that’s kind of the wrong attitude to adopt. I think it’s better to plan worst case scenario which means expecting your game to make no money. If you always plan for that, you increase the chances of staying in business. I think it’s really important to live within your means too.

What are we doing now?

Miracle Tea have been running for over 3 years now since competing in Tranzfuser. We are a remote studio and our list of working contractors is growing. Ruya launched, it won a handful of awards that have given us studio recognition. We are now working on our new game Alula that was recently awarded the UK Games Fund round 5 grant. We aim to launch next year.

If you have any questions for our team about Tranzfuser, feel free to join our lovely Discord community, don’t be shy!